The Man Who Sold America: The Amazing (But True!) Story of Albert D. Lasker and the Creation of the Advertising Century
By Jeffrey Cruikshank & Arthur W. Schultz 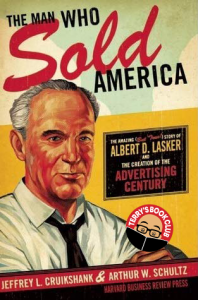 A few seasons ago, we did an episode on Albert D. Lasker, possibly the most fascinating adman of the 20th century.

It was our most listened-to episode of the year.

Lasker changed advertising for all time. He brought the concept of “salesmanship” to advertising, which up until then had only been used to deliver news. It seems obvious to say that now, but back then it was “trigonometry,” as Lasker later said.

His firm grew to become the second largest ad agency in the country. Lasker was a master salesman in the boardroom. But secretly shook with fear before every presentation.

He did the first automobile advertising. He saved the orange growing industry by convincing them to re-name themselves “Sunkist” and created a revolutionary ad that said “Drink an orange.” Nobody had thought of selling orange “juice” before that. Sales exploded.

He helped elect a President. He invested in the Chicago White Sox baseball team and installed the first baseball commissioner after the Black Sox scandal. He named Wrigley Field after his Wrigley chewing gum client.

Lasker created a groundbreaking cancer storyline for the famous Amos ‘N Andy radio show in the 1940’s to persuade people to get medical checkups.

And he did all this – and more – while suffering from debilitating bouts of anxiety.

This book is the story of the most influential adman of all time.

And the most forgotten.

If you liked our Albert Lasker episode, you will love the book.

1. The sheer number of products Lasker launched that are still around today is stunning. Only a few of which are mentioned above.

2. Fascinating to discover the most successful man in advertising history never wanted to be in advertising. He always dreamed of being a reporter. Right to his final days.

3. It is so inspiring to realize a man who suffered from constant bouts of anxiety and terminal shyness could push through it all to achieve remarkable success. 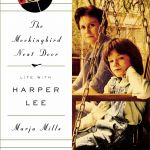 The Mockingbird Next Door
By Marja MillsNews, Terry’s Book Club 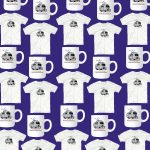