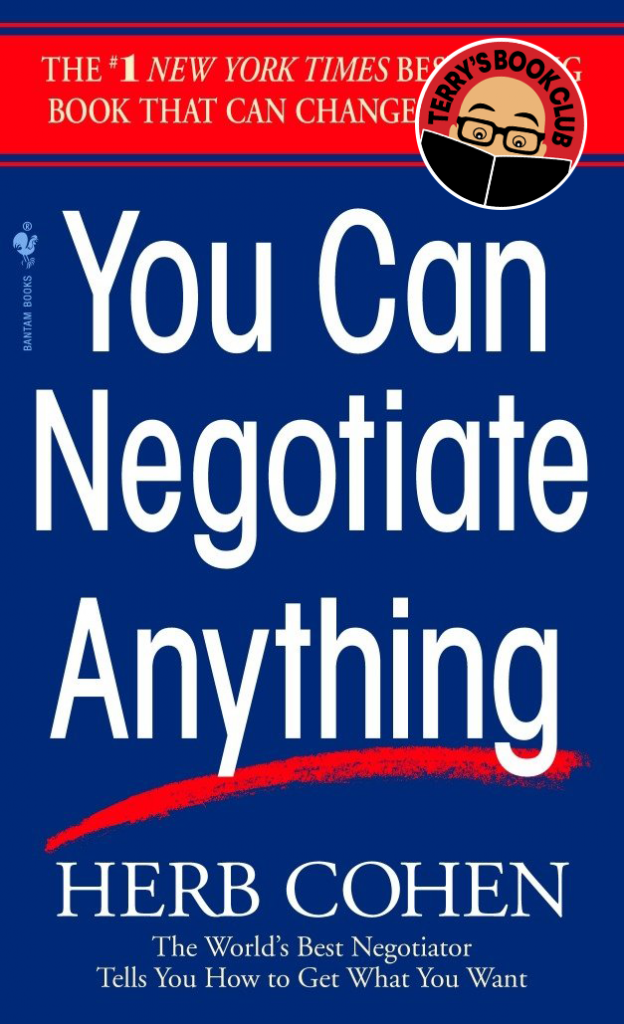 You Can Negotiate Anything
by Herb Cohen

For this month’s selection, I’m going to recommend an book I read many years ago.

It was written in 1982 and spent nine months on the New York Times Best-Seller List. It’s still easy to find online.

Author Herb Cohen was one of the world’s top negotiators. He was brought in when corporations needed to negotiate mega deals. He was hired by governments when important international agreements needed to be hammered out. He was even brought in to negotiate difficult hostage situations.

Many people struggle when it comes to negotiating. Especially when you don’t think you are in the power position. Like when you are negotiating your salary, the price of a new car or even something small like the cost of a new shirt.

Cohen breaks down the beats of a deal. He explains that you need to set a goal before entering into a negotiation. You need to understand the desires on the other side of the table. And you have to make a list of smaller things you’re willing to concede in order to get the big things you really want.

One of the most valuable insights I learned was how important the concept of “time” was in a negotiation. The more time you can put in a negotiation, the more the result swings over to your favour.

For example, if you are willing to spend time trying suits on in a clothing store, the salesperson will feel invested in the transaction. Then just before you put your credit card down, you say “throw in a free tie.” You’ll get that tie because the salesperson won’t walk away from the sale at that point. Too much time has been invested.

Or if you sense a hard no on a salary increase, be ready to negotiate smaller concessions that are valuable to you but easy for your employer to grant – like paid parking, a transit pass or an additional week of vacation time.

I have to say that over the years of running a company and negotiating various contracts and deals, I’ve used the lessons from this book over and over again.

This is one of those books that you will take with you for years to come.

1. Cohen teaches you to look at a negotiation in a three-dimensional way – a huge advantage to you.

2. Cohen makes you realize that every price is negotiable – even the price of a washer & dryer at a department store. Retailers don’t want you to know that – but it’s true.

3. Cohen teaches you that a win-win negotiation need a strategy. That you never walk into a negotiation without a plan that is flexible enough to roll with the punches but also smart enough to get exactly what you want.